With the release of NSX 6.2 we now have the ability to span Transport Zones, Logical Networks, Distributed Logical Routers (DLR's) and even firewall rules across multiple vCenters.  In this post I'm going to show you how to install NSX 6.2 in a multi vCenter environment.  In my lab at home I have two physical ESXi hosts each running four nested ESXi hosts to simulate a Palo Alto and New York Datacenter.  All hosts are running vSphere 6.0 and there are two vCenters in linked mode with the Platform Services Controller running on the Palo Alto vCenter. The screen shot below shows the configuration via the vSphere Web Client:

I'm not going to show you how to deploy NSX Manager as this has been very well documented by numerous bloggers. I'd recommend Giuliano Bertello's (Blog | Twitter) NSX for newbies series.  So I've deployed two NSX managers called PA-NSX-01 and NY-NSX-01 and associated them with the corresponding vCenters:

PA-NSX-01 is configured to use PA-VCSA-01 for it's lookup service and also it's vCenter server: 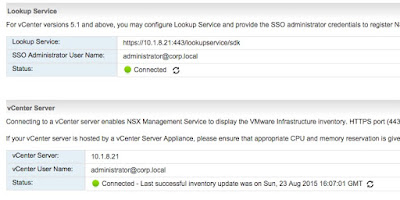 NY-NSX-01 is configured to use PA-VCSA-01 for it's lookup service and NY-VCSA-01 as it's vCenter server: 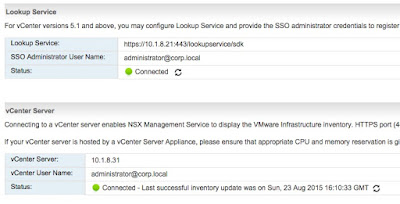 Remember when using vCenter 6 the lookup service port is now 443 instead of 7444.

After logging into the Web Client you will now see that you can manage multiple NSX Managers:

I've deployed a single controller in the Palo Alto management cluster as this is just a test lab: 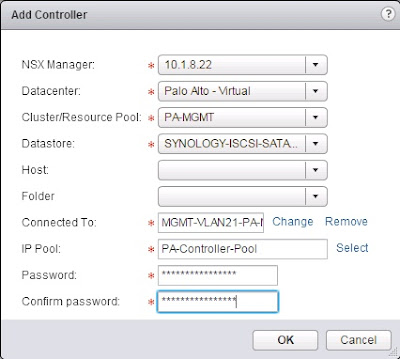 I'm also going to prepare all 4 clusters and configure the host VTEP's: 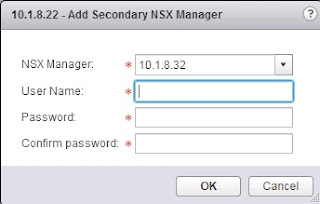 Once finished we should have Primary and Secondary NSX Manager instances and you should see the secondary instance using the NSX Controller from the primary site:

Within NSX 6.2 there are four NSX Manager Roles:

Standalone - Default option for new installation or upgrade. All objects in a Standalone NSX Manager are local.

Primary - One NSX Manager per Cross VC NSX deployment is assigned the Primary role. Deploys and manages the Universal Controller Cluster and any Universal objects.

Secondary - The Secondary role is assigned when adding a Standalone NSX Manager to a Primary. Universal objects from the primary are synchronised to the Secondary where they are read-only.

Transit - Temporary role used when an NSX Manager has a Primary or Secondary Role removed. If universal objects still exist the NSX Manager is assigned a Transit role until these objects are deleted then it can move to a Standalone role.
Posted by Michael at 09:30
Email ThisBlogThis!Share to TwitterShare to FacebookShare to Pinterest
Labels: NSX, vCenter