It’s been a while since my last post so what better what to start that with a home lab update.  My previous home lab was an HP Proliant DL380.  This did serve it’s purpose but due to it being a power hungry beast and the fact it sounded like a jet engine it was just impractical to run 24 x 7.  I wanted a lab that could run a DC, SQL, vCenter 5 and a Windows 7 machine for remote access.  It would also be nice to have a bit of spare capacity for trialling other VM / software but primarily this was to learn vSphere 5 to prepare for both VCP5 and both VCAP’s once released (I passed VCP5 about 2 months ago).

So, after reviewing what was out there I decided on the HP Microserver due to cost (HP are currently offering £100 cash back) and power consumption.  Simon Seagrave has an excellent review of the HP Microserver here  I purchased the following:

The idea was to have two ESXi5 hosts and one SAN (OpenFiler).  Since HP still had the £100 cash back offer on I decided to purchase another Microserver, this time a N40L which came with 2 GB ram instead of 1.  All 4 servers came with 250gb 7.2k disks which I inserted into the N40L and installed OpenFiler and created 2 iSCSI LUNS and NFS shares.  Since I now have 3 ESXi5 hosts I use two for the general day to day operations and also use the 3rd for testing auto deploy.  I purchased a cheap Net Gear gigabit switch (unmanaged) and hooked it all up.  I have ESXi5 running of USB connected to the OpenFiler SAN. 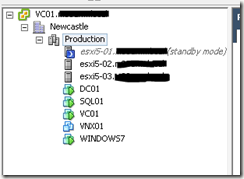 Posted by Michael at 21:29
Email ThisBlogThis!Share to TwitterShare to FacebookShare to Pinterest
Labels: Home Lab